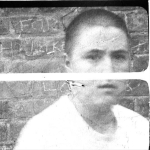 Leopoldo Bloom has been making handmade films and books for the past twenty-five years. His studio practice lies at the intersection of photography and book arts. His performative film series Big Films have been screened at the Whitney Museum of American Art, the San Francisco Cinematheque, and the Pleasure Dome in Toronto. His current photo-book project: The Migratory Patterns of North American Queers at the Turn of the Century, is on hold due to a civil rights dispute with his graduate school. The Migratory Patterns … uses the obsolete format of the family photo album to reexamine queer storytelling. The online segment of the book provides narrative templates for viewers to present their personal story and photos. As a part of his David vs Goliath campaign to return to his studio space and graduate studies at Arizona State University, Bloom is petitioning Starbucks for support with an interactive meme project entitled #BIOGRAPHY of COMPLAINT.